Get a New Grain: Bulgur

I’m always looking for quick-cooking whole grains I can whip on even the busiest evenings. In that regard, bulgur has become my new best friend. You’d be hard-pressed to find a whole grain that cooks up faster (though quinoa comes close). 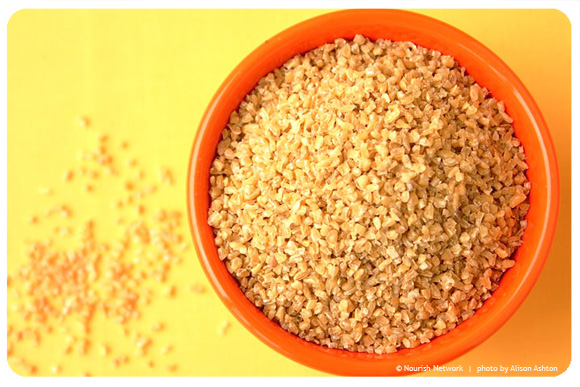 Bulgur is a staple of Middle Eastern cuisine and a standby in Greek fare, too. You could think of it as the grandchild of wheat berries and the child of cracked wheat. Wheat berries are whole wheat kernels. Cracked wheat is nothing more than wheat berries broken into smaller fragments that cook a bit more quickly.

But just as each generation should improve on the previous one, bulgur speeds things up even more. It’s made from wheat berries that have been steamed, dried and crushed. The result: a whole grain that looks similar to steel-cut oats but cooks in as little as 10 minutes. That’s why some refer to it as “Middle Eastern pasta.”

What It Tastes Like: Bulgur can be made from durum, hard red, hard white or soft white wheat. The stuff made from durum and white wheat varieties has a golden hue with mild nutty flavor and tender yet chewy texture. Bulgur made with hard red wheat is a tawnier shade and has a heartier consistency and more assertive taste with slightly bitter undertones.

How to Cook It: Bulgur is available in grinds from fine to extra-coarse. The finer the grind, the faster the it cooks. Fine- and medium-grain are what you’ll find most commonly. Prepare fine- or medium-grain bulgur the way you would couscous: bring liquid (water or stock) to a boil, add the bulgur, cover, remove from the heat and let it stand 10-20 minutes. This allows the grains to steam and get tender but not mushy. Many cooks use 2 parts liquid to 1 part bulgur. At NOURISH Evolution, we prefer a 1:1 ratio for cooking fine and medium grains, which creates delightfully fluffy results. For coarser grains, bring liquid to a boil, add the bulgur, cover, reduce the heat and simmer 20-25 minutes or until it’s tender; drain any excess liquid. One cup of uncooked grains yields about 3 cups cooked bulgur.

How to Use It: Bulgur is a great speedy side dish that you can dress up with chopped herbs, vegetables, nuts, dried fruit or whatever else takes your fancy. It’s the basis for the traditional Middle Eastern herb-flecked grain salad, tabbouleh (Greek cuisine has its own version). Middle Eastern cooks also combine it with ground meat for kibbeh (try our version in Spiced Lamb and Bulgur Sliders). You can cook it risotto style, too, and enjoy it for breakfast, which I discovered after accidentally grabbing an unmarked container of bulgur that I thought was steel-cut oats. (It was a happy mistake, since the bulgur cooked much faster.) It’s also a surprisingly good fit with desserts like our Plum Parfaits with Bulgur and Vanilla Yogurt.

Additional Notes: You’ll find bulgur in packages (either near the flour or with other whole grains) at supermarkets and in bulk bins at health-food stores.

Along with convenience, bulgur has some serious nutritional cred. A 3/4-cup portion (the serving size in our lamb tagine recipe here) has 113 calories, a whopping 6 grams of fiber and 4.5 grams of protein. It also offers more than 40% of your daily need for manganese, a  humble trace element that helps regulate your metabolism and build bone. That makes bulgur one mighty little grain!