Devotees of cast-iron cookware are fond of calling it “the original” nonstick pan. But it wasn’t until I lived in Alabama that I came to appreciate the hardworking charms of a humble cast-iron skillet. Southern home cooks are particularly attached to their cast iron, which is often passed down from their mamas and which years of cooking have endowed with a gorgeous dark seasoned patina that’s an amazing stick-resistant surface. 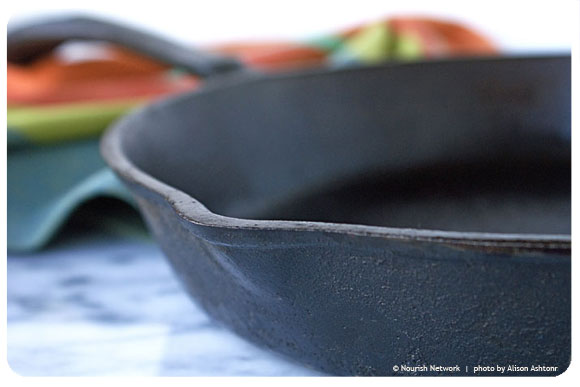 Cooks prize cast iron because it heats slowly and evenly and retains heat better than just about any other material. It’s great for high-heat cooking, to sear a steak or scallops, for instance. A deep skillet is ideal for frying chicken.

If you happen to have a cast-iron skillet languishing in the back of your cupboard, now’s the time to rescue it form obscurity and re-season it. If your mom didn’t pass along a family skillet, get one now. It’s a small investment (about $20) for an heirloom-quality piece of cookware. You can find cast-iron pots and pans at any housewares store and many hardware stores, or online. Most new cast-iron pans come preseasoned and ready to cook. But even those will need occasional re-seasoning when you notice  food starts sticking to the pan.

There are nearly as many ways to season cast-iron cookware as there are cooks, and everyone swears theirs  is the One True Method. Some cooks swear by animal fat (i.e., lard) for seasoning; others say you should never use animal fat. Some sources say you must bake the oiled pot in a high oven; others advocate a low oven. This is the method an Alabama friend shared with me:

If you use, clean and store your cast-iron properly, you’ll rarely need to re-season it:

If you’ve got an old cast-iron pan that needs restoring, here’s an easy method from Lodge (yes, it’s not exactly the same as the method above, but remember, there’s room for variation):

And don’t forget to use your pan often. The more you cook with it, the better seasoned it will be and the less often you’ll need to re-season it!